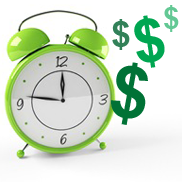 Save it for something you want?

Save it for an emergency?

Or spend it?
Well, if the cash was burning a hole in your pocket,  you could put it towards one of the top selling items of all time and still have some coin left over! That’s kinda like saving it.

Not surprisingly, these are some of the top selling items of all time:

Chances are high that you own at least one or more of the above top selling items. I myself own three of the five listed, and yes the Michael Jackson Thriller album is one of them!

So what would you spend your $500 dollars on?  How about a new career?
Right now ILScorp is offering 6 Virtual Classroom Programs for only $450 each. Programs include CAIB Exam Preparation and Level 1 General Insurance Licensing.

Classes are completed entirely online, and start on Monday July 21 to August 15.

Click here to learn how you can build your career in insurance for under $500 bucks.

At the special summer promo price of only $450, you’ll still have a little coin left over, but only until Monday July 21st!